I never have enough time. Ever since my grandmother patiently explained to a very young little me that there is never a good reason for an imaginative person to allow themselves to be bored I’ve been keeping myself all sorts of busy. Sometimes, back in my pre-parent days, even busy doing nothing. But as of late I feel like the

race begins when I wake up five minutes before my alarm and ends when I lay down having only accomplished three quarters of my to-do list. On my good days! My small, super dependent roommates have been sick on and off this week and making me beautiful art.

I’ve been reading A People’s History of the United States by Howard Zinn. I’m only about a quarter in, but it is mesmerizing, terrifying, shocking, and revelatory so far. I highly 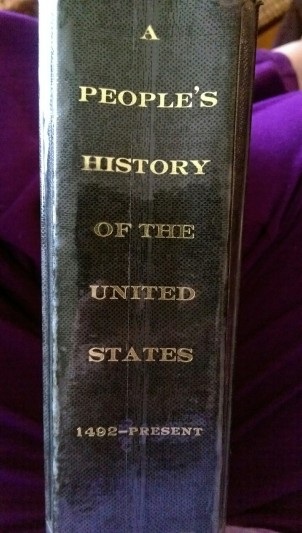 recommend educating yourself with this fine book. I don’t read that much non-fiction for fun, so an interesting experience to say the least. We started watching American Gods, of course, and it is amazing (my review). I would take any job Bryan Fuller wanted to give me. How does one apply to be an apprentice to a TV God? Hubs and I watched American Honey a few weeks ago and scenes and moments from it are still replaying in my head. It was engaging while we watched but I did not expect to still be thinking back on the film. Beautifully shot too. Also reading Bared To You, by Sylvia Day. That’s going about how you’d expect 😛

Maximus remains a doggie challenge, though I did get him to come to me for a treat when he got out of the yard a few days ago. Progress of a sort, I suppose.

I almost forgot! With all the stress and uncertainty in our world right now I wanted to recommend watching all the back seasons of Supernatural. For some reason, I find watching Sam and Dean Winchester driving around together and stabbing bad guys oddly therapeutic. Maybe you will too. All previous 1 million seasons are on Netflix for your tuning-out-your-brain needs.

WIP is still Tinseltown Temptress #3 – Screwed Over. I’m loving this one the most of any of the books. So much touching back on various characters it’s like old home week every day on my keyboard. Cassie is … changing. Evolving, I guess, but it sounds pretentious. She is learning to prioritize.

Both my released books continue to get great reviews on Amazon. Book 1, Screw Up, is still at 99 cents and Book 2 remains on KU for a limited time

The sun is actually shining today, though it is still cold and VERY windy. Hope you’re on a warm, sunny beach right now. What are you reading?

I’ve heard a few people say they’re on the fence about watching Bryan Fuller’s new tv adaptation of Neil Gaiman’s novel American Gods, brought to us lucky mortals by Starz. The aim of my words here are to push you one way or the other. Warning: there will be blood (not actual blood, only really, really bloody SPOILERS, but still).

Many fans of the book are afraid to watch, worried that the adaptation can’t possibly live up to the source. ‘They’ll cut the wrong stuff and they won’t get the characters right, not the way they are in my head.’ Episode one down, and I’m here to tell you; it’s going to satisfy you. Obviously not every word and deed can be included but it seems a pretty solid match so far. Toward the end there’s an epic bar brawl between our hero Shadow (Ricky Whittle) and Mad Sweeny (Pablo Schreiber) where they decimate each other and destroy part of a gator-mouth-dominated bar. Look no further than Mr. Wednesday (expertly played by Ian McShane) casually enjoying their violence to perfectly exemplify the role in which he was cast. The performances throughout were nuanced, deep, and thoughtful. Whittle’s physical performance gives the audience incredible glimpses of Shadow’s inner struggle often without words, or even concrete action.

Another cause for hesitation is the fear that this show, like many other MA rated, high-end cable productions, will use rape to convey horror, character motivation, or heighten the suspense of the male protagonist’s storyline. Fuller don’t play that. He is against using rape scenes just to add drama, saying, “My role, as a showrunner, is to want to watch the show we’re creating. And if something feels exploitative or unnecessary, I’ll try to avoid it.” That being said, smack dab in episode one, a man just re-entering the dating scene (Joel Murray) agrees to have sex with Bilquis (Yetide Badaki) and does gets sucked into her vag, happily consumed whole. I think most of us would qualify that as a violent sex act, so perhaps Fuller intends to stick with the story as written on this subject.

Then there’s the old, ‘it looks too violent. Isn’t it going to be gory?’ dilemma. It is. One of the Gods’ coming to America origin tale is told here in the first episode. Vikings land on a shoreline and must plead with the Allfather to make wind for them to sail home. They end up fighting each other to please him (war God, don’t you know) and the resulting battle is absolutely horrific. A man’s arm is severed while holding a sword and flies through the air to land stabbed directly through his pal’s exposed throat. Truly fantastic pacing, cinematography, and effects during this scene, but if action/horror is not your thing, you might need a blanket to shield your eyes as needed.

More obstacles: ‘But I don’t have/can’t afford Starz.’ The app is just $9 a month. Wait a few weeks and it’ll only be a bit over $1 per episode. Well worth it. ‘I haven’t read the book yet!’ Go to the library. The novel by Neil Gaiman is wonderful and I highly recommend it.

With no other issues to address, I think it’s clear that American Gods should be your new favorite show. Now let the wait for next week’s episode begin.